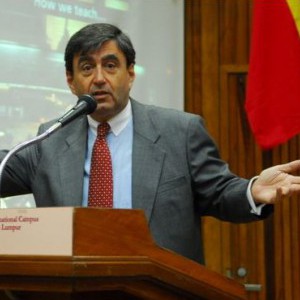 The HBS Club, Harvard Club and The Ivy Circle are pleased to confirm:

“Confessions of a converted lecturer”

Eric Mazur, a Dutch national, is an internationally recognized scientist and researcher. He leads a vigorous research program in optical physics and supervises one of the largest research groups in the Physics Department at Harvard University. After obtaining a Ph.D. degree in experimental physics at the University of Leiden in the Netherlands in 1981, Dr. Mazur went to Harvard University in 1982. In 1984 he joined the faculty and obtained tenure six years later. Dr. Mazur has made important contributions to spectroscopy, light scattering, the interaction of ultrashort laser pulses with materials and nanophotonics.

In 1988 he was awarded a Presidential Young Investigator Award. He is Fellow of the Optical Society of America and Fellow of the American Physical Society, and has been named APS Centennial Lecturer during the Society's centennial year. In 2007 Mazur was appointed Phi Beta Kappa Visiting Scholar. In 2008 Mazur received the Esther Hoffman Beller award from the Optical Society of America and the Millikan Medal from the American Association of Physics Teachers. In 2010 he was elected Director at Large for the Optical Society of America. Dr. Mazur is a Member of the Royal Academy of Sciences of the Netherlands. He is honorary professor at the Institute of Semiconductor Physics of the Chinese Academy of Sciences in Beijing and has held appointments as Visiting Professor or Distinguished Lecturer at Princeton University, Vanderbilt University, the University of Leuven in Belgium, National Taiwan University in Taiwan, Carnegie Mellon University, and Hong Kong University.

In addition to his work in optical physics, Dr. Mazur is interested in education, science policy, outreach, and the public perception of science. He believes that better science education for all — not just science majors — is vital for continued scientific progress. To this end, Dr. Mazur devotes part of his research group's effort to education research and finding verifiable ways to improve science education. In 1990 he began developing Peer Instruction a method for teaching large lecture classes interactively. Dr. Mazur's teaching method has developed a large following, both nationally and internationally, and has been adopted across many science disciplines.
Eric writes about the subject of his lecture:

“I thought I was a good teacher until I discovered my students were just memorizing information rather than learning to understand the material. Who was to blame? The students? The material? I will explain how I came to the agonizing conclusion that the culprit was neither of these. It was my teaching that caused students to fail! I will show how I have adjusted my approach to teaching and how it has improved my students' performance significantly”

To participate you are kindly requested to register at hbsc@planet.nl and pay  € 60 per person prior to April 28th. This includes welcome drinks + dinner, starting at 18.00 hrs. There are a limited number of seats available. If you wish to only attend the lecture, the admission price is Euro 15 per person. This begins at 19.45 hrs.