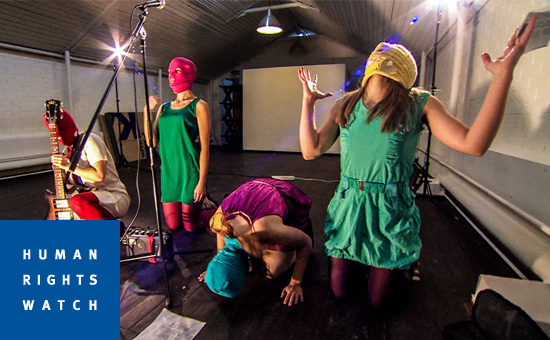 From 31 January to 2 February, Human Rights Watch (HRW), in collaboration with De Balie, ASN Bank and De Groene Amsterdammer, will present the second edition of the Human Rights Weekend. Films and discussions with directors, HRW researchers, photographers and journalists.

Topics such as: Pussy Riot / / front line journalism / / the voice of the refugee / / land grabbing / / LGBT rights in Serbia / / freedom of speech in Belarus / / reporting change in Egypt / / life in a refugee camp.

Special guests include the newly released members of Pussy Riot

Tickets and more information about the events are now on sale at de Balie website.

In addition to the general program, please be aware that a special Ivy Circle borrel will be held on Saturday, 1 February, from 17:00 to 18:00 at de Balie.  The following HRW Directors and Researcher (all 3 IC member alumni, 2 from Columbia) will join for drinks and discussion on human rights issues around Europe, MidEast and Africa:

Rachel Denber, Deputy Director of the Europe and Central Asia Division, specializes in countries of the former Soviet Union. Previously, Denber directed Human Rights Watch’s Moscow office and did field research and advocacy in Russia, Georgia, Armenia, Azerbaijan, Kazakhstan, Uzbekistan, Estonia, Ukraine, Kyrgyzstan and Tajikistan. She has authored reports on a wide range of human rights issues throughout the region. Denber earned a bachelor’s degree from Rutgers University in international relations and a master’s degree in political science from Columbia University, where she studied at the Harriman Institute. She speaks Russian and French.

Lama Fakih is the Syria and Lebanon researcher at Human Rights Watch. Previously, she worked as the Gender, Human Rights and Counter-Terrorism Fellow at the Center for Human Rights and Global Justice (CHRGJ) at the New York University School of Law. In 2009, Fakih consulted for the Iraqi Refugee Assistant Project in Damascus, Syria where she provided legal assistance to Iraqi refugees seeking resettlement to the United States. In 2008-2009 she was the Center Fellow at CHRGJ, where she worked on a range of human rights issues including corporate accountability and human rights and counter-terrorism. Additionally, Fakih was awarded a Fulbright Fellowship to conduct research on the implementation of Islamic law in the Egyptian National Courts. Fakih holds a bachelor’s degree with a concentration in Middle East studies from Sarah Lawrence College and a law degree from New York University, where she was awarded the Ann Petluck Poses Memorial Prize for her work in the university’s International Human Rights Clinic. She speaks Arabic.

Leslie Lefkow is the deputy director for Human Rights Watch’s Africa Division. She has specialized expertise in investigating abuses in armed conflict, humanitarian crises, Sudan, and the Horn of Africa. She has conducted investigations for Human Rights Watch in Sudan, Côte d’Ivoire, Liberia, Somalia, Ethiopia, and Kenya. Before joining Human Rights Watch, she worked for humanitarian organizations in Sudan, the Democratic Republic of Congo, and Sierra Leone. Lefkow is a graduate of Columbia Law School and Bryn Mawr College.