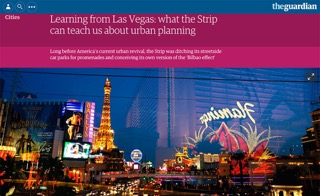 THE STRIP: Las Vegas and the Architecture of the American Dream

7.30pm on Wednesday 8 March 2017 at Pakhuis de Zwijger in Amsterdam

Join STEFAN AL, Dutch architect and Associate Professor of Urban Design at the University of Pennsylvania, for the launch of his new book and a discussion about 21st century urbanism. Stefan will be joined by Tracy Metz, Journalist and Director of The John Adams Institute (American Culture in the Netherlands).

42 million people visited Las Vegas in 2015, ten million more than Paris! The architecture of the Las Vegas Strip has evolved from the Wild West, with saloon doors and wagon wheels, succeeded by Disney-like theme parks featuring replicas of Venetian canals, New York skyscrapers and the Eiffel Tower, to classy casino’s designed by famous architects with zillion-dollar collections of art. Las Vegas became the “ implosion capital of the world” as developers, driven by competition, got rid of the old to make way for the new. Stefan Al examines the many transformations of the Las Vegas Strip, arguing that they mirror America itself. The Strip, as popularly supposed, is not a display of architectural freaks but representative of architectural trends and a record of social, cultural and economic change.

Stefan Al is a Dutch architect, urban designer and leading expert on urbanization in developing countries, high-density cities and cities of spectacle and entertainment. He is currently Associate Professor of Urban Design at the University of Pennsylvania.

Have a drink with us at the cash bar following the event. If you plan to join the event please also email us: pennwhartonclubnetherlands@gmail.com

Hope to see some of you there!